Survival of the Fittest: Being Responsive to Change 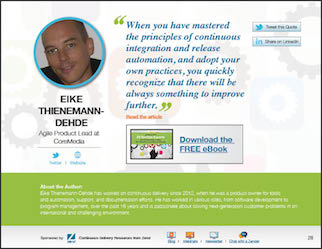 I consider continuous delivery an ongoing journey. When you have mastered the principles of continuous integration and release automation, including deployment and quality assurance, and adopt your own practices, you quickly recognize that there will be always something to improve further.

After my company’s successful agile transition and the migration to a distributed source code management system some years ago, we ramped up a dedicated team driven by the need to move quickly and incorporate support for automation tools like Chef and related processes directly into the product we were deploying in various operating environments, with their individual tool chains. When tackling change management challenges, it helps to create a community of practice made up of team delegates.

Being able to bootstrap continuous integration slave machines within minutes was the key to initially embracing the concept of Infrastructure as Code. In conjunction with the adoption of the Jenkins Job DSL plug in, it helped coordinate among all product development teams.

Baking build and test or production machines from well-defined Packer templates for any environment (e.g., Vagrant and vSphere or Amazon Web Services) increased reproducibility significantly and helped establish a fast in-house feedback loop so that we could spot issues such as commits that broke the deployment in some operating environments early.

So, to conquer the maturity level of automated tests, it helps to start with a dedicated code-freeze or release branch approach to avoid an initial moving target effect. Depending on the complexity of your regression tests in all supported operating environments—and especially the benefits versus cost of automated user interface tests versus manual tests—it might be feasible to start with weekly releases while preparing for more on-demand rollouts. You can consider your initial continuous delivery transition successful if suddenly your process is waiting for your people!

I suggest leveraging open source software infrastructure tools and innovating on a higher level by embracing a culture of “proudly found elsewhere” (preventing the “not invented here” syndrome). Collaborate in the open to give and get instant feedback. The impact on productivity and quality will create more freedom and options for experimentation.

Learning and moving fast can also be your company’s differentiator, especially in a highly competitive environment. Always remember, “It is not the strongest of the species that survives, nor the most intelligent, but those most responsive to change” (Charles Darwin).