Author, Researcher at IT Revolution Press 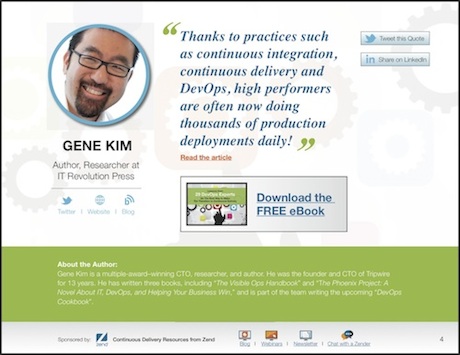 Among the benefits organizations gain when they adopt DevOps are faster time to market and reduced IT waste, both of which increase organizational effectiveness and market competitiveness.

Back in 2007, at the IT Process Institute, we benchmarked 1,500 IT organizations to study what the high-performing IT organizations were doing differently and how they achieved their “good to great” transformation. Back then, we thought that 1,000 production changes per week was fast.I learned from my friends at the Software Engineering Institute at Carnegie Mellon University that in every industry, high performers accelerate away from the herd. In other words, the best continue to get even better.

Thanks to practices such as continuous integration, continuous delivery and DevOps, high performers are often now doing thousands of production deployments daily! Amazon has gone on record that they are routinely performing over 23,000 deploys per day, while preserving world-class reliability, stability and security.

High deployment rates also enable rapid and constant experimentation. Scott Cook, the founder of Intuit, has been an outspoken advocate for a “rampant innovation culture” at all levels of the organization. One of my favorite examples is:

“Every employee [should be able to] do rapid, high-velocity experiments . . . . Dan Maurer runs our consumer division, including running the TurboTax website. When he took over, we did about seven experiments a year. By installing a rampant innovation culture, they now do 165 experiments in the three months of tax season. Business result? Conversion rate of the website is up 50 percent. Employee result? The folks just love it, because now their ideas can make it to market.”

To me, the most shocking part of Scott Cook’s story is that they were doing all these experiments during peak tax filing season! Most organizations have change freezes during their peak seasons, but if you can increase conversion rates and therefore sales during peak seasons when your competitor cannot, then that’s a genuine competitive advantage. The prerequisites to doing so include being able to make many small changes quickly, without disrupting service to customers.

Mike Orzen and I have long talked about the enormous waste in the IT value stream caused by long lead times, poor hand-offs, unplanned work, and rework. We estimated how much value we could recapture by applying DevOps-like principles, calculating that if we could halve the amount of IT waste and redeploy those dollars in a way that could return 5 times what was invested, we would generate $3 trillion of value per year.

That’s a staggering amount and an opportunity that we’re letting slip through our fingers. That’s 4.7 percent of annual global gross domestic product, or more than the entire economic output of Germany.

This is important, especially when I think about the world my three children will inherit. The potential economic impact to productivity, standards of living, and prosperity almost makes this a moral imperative. However, there’s an even greater cost. Working in most IT organizations is often thankless and frustrating. People feel as if they’re trapped in an ever-repeating horror movie, helpless to change the outcome. Management abdicates their responsibility to ensure that IT is managed well, resulting in endless intertribal warfare between development, IT operations, and information security. Things only get worse when the auditors show up.

The inevitable result is chronic underachievement. As humans, we’re wired to contribute and to feel like we’re actively making a difference. Yet, all too often, when IT professionals ask their organization for support, they’re met with “you don’t understand,” or worse, a barely masked, “You don’t matter.”

At the IT Revolution Press, our mission is to improve the livelihoods of 1 million IT workers by 2017. We hope that The Phoenix Project can help business and IT gain a shared understanding of the problem and that the DevOps Cookbook can help people fix the problem.