Co-founder and Chief Scientist at Cloudant, an IBM Company 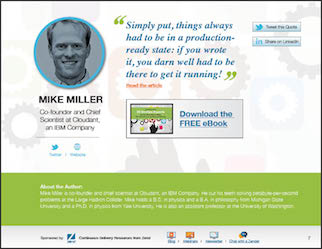 It’s strange to think of continuous delivery as something new or intimidating: it’s all I’ve ever known! I grew up programming for the ultra–real-time environment of experimental particle physics. When you’re firing up a billion-dollar machine for the first time, even the best-designed systems have their commissioning quirks. Everything—down to the custom hardware—is continuously evolving. The first lines of production software I ever wrote went live a few minutes after commit. Thank goodness they passed the tests!

In big science, time is precious and expensive. Hours are measured in millions of dollars. That was a lot for a fresh graduate like myself to grasp. That pressure stemmed from opportunity, and ingraining continuous delivery mindset (the idea that “master” is essentially deployable at a moment’s notice) was the best way to balance responsibility with agility. We didn’t set out with a mandate to build a DevOps culture: we evolved based on our own system dynamics. Simply put, things always had to be in a production-ready state: if you wrote it, you darn well had to be there to get it running! That shared responsibility was the core principle by which our loosely federated, untrained teams were able to support such a professional enterprise.

At Cloudant, we’ve been able to grow that base culture into something core to our entire organization. Nobody is removed from the user experience. And we’re not alone. Every market is now a land grab, and new product (new revenue!) is king. That requires rapid innovation, delivery, and operations in a way that simply isn’t possible with the traditional enterprise application life cycle. In the time it takes to plan your next release, someone may have already captured the market. Adopting continuous delivery approaches for your team and aggressively weaving together cloud services is the best way to be effective in this brave new world. Start small, launch early, fail fast, and iterate. That’s the mark of the new winner.